“FREE Meditation CD and Report Reveals The Secret To Eliminating Stress, Anxiety and Depression From Your Life Once And For All”

And The Best Part – You Can Use the Techniques Inside to Start Today.
This tell-all kit contains the most important gems of wisdom I’ve discovered in my 30 years as one of the nations leading experts in Guided Meditations in Sydney.

Inside you’ll discover…
•    A little known secret to eliminating stress from your life.
•    How to banish your anxiety so you can have a solid nights sleep.
•    An ancient technique for dealing with depression and times of loss.

To get your hands on your FREE report and CD, simply click on the buttons here to download!

The FREE report and FREE guided meditation CD reveal ancient and powerful, easy to use techniques. Learn why thousands keep returning to these meditations. The results have been amazing and will astound you!

To access the 20 page PDF report and CD saved as a complete mp3 file ready for download, click on the buttons above. Please note that the mp3 file will take a few minutes to download, as it is quite a large file.

If you have any problems downloading, please email me at  [email protected] 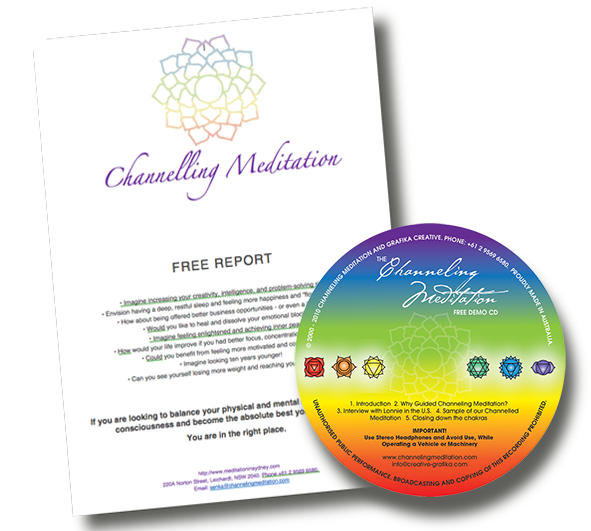 If you’re interested in reducing the stress in your life, read more about our Free Channeling Meditation® CD. I want you to have all the information you need to truly understand how our program can lead you towards joy, happiness, abundance, enlightenment and change your life!

Our amazing Free CD lets you know how to accelerate your mental, emotional, and spiritual growth in ways that will astound you, through practicing our Channeling Meditation® Four Month Course. In fact, I guarantee that my proven system will inspire and uplift you like nothing else ever has. Reading this entire letter can be the major turning point in your life, and you’ll thank yourself later for getting all the facts!

Now, Let’s Find Out the Secret!… How?

Imagine connecting your brain to a specially channelled meditation soundtrack that envelopes you in a deep meditation. A meditation so powerful that it immediately begins to change the structure of your nervous system, your thought patterns and your life!

Do you want to:

If you want all these benefits and more, click this link immediately.

It’s True, Simply By Practising Channeling Meditation Daily You Can!

If you’re thinking that all these benefits sound too good to be true, I can’t blame you. I too have been consistently amazed by the benefits meditation has brought me. Fortunately, the many benefits of Channeling Meditation® have been well documented by participants in our meditation groups and classes. The program is called The Elite ‘Channeling Meditation’ Course, and you’ll find it a rewarding and life-altering experience.

These results haven’t been experienced by only a handful of people. Many long term participants in our meditation groups and classes have shown all the benefits listed above, as well as many others. Is all this really possible from participating and listening to our Channeling Meditation program? Positively! To find out more, read the testimonials in our ‘What Others Have to Say” section of the website.

Our Channeling Meditation® program is the result of years of research and innovation, and is an incredibly powerful audio program, now available for you to experience. Featuring peaceful music and soothing environmental sounds behind my voice as I guide you through the meditation. Our program is much more than an “instant meditation” fad. By experiencing a deep meditative state for only a short time each day, regular participants can achieve a heightened mental state and feel more energised with effects lasting for days

Shares her experience of our Channeling Meditation and the great benefits she gained in just a few classes.

It’s our pleasure to share these fascinating developments with our participants and now for the first time, with you!

By now, you’re probably wondering what the brain’s response to meditation is. When you are in a state of meditation-triggered deep relaxation, a number of mood-altering hormones, including serotonin, are released. Your heart rate slows, and growth hormones released during the process aid in repairing cells and tissues. Deep meditation also allows increased communication between the two hemispheres of the brain, a phenomenon that is believed to be one of the characteristics separating geniuses like DaVinci, Einstein, and Mozart from the rest of us. Mental and emotional health can also be profoundly improved through the use of our Channeling Meditation techniques.

It’s True, My Life Changed For The Better, And So Will Yours!

Meditation is a process, and not an instant solution. Just as you train your body by lifting weights and working out, you train your mind with meditation. Like many people, I experienced periods of rapid growth as well as times when my progress seemed to hit a plateau. Eventually, just when I thought I’d changed as much as I could, the process would pick up speed and I’d find myself making rapid progress again.

As you’ll find out for yourself, the meditation process can sometimes be very intense. I experienced a wide range of intense emotions as I worked through old issues. Thanks to the peace, clarity, and self-awareness. Each breakthrough made the world seem a new and exciting place. I found the universe began to respond to me in ways I could never have predicted – all for the better.

You might think that all these changes would be sudden, drastic, and a little scary, but that’s not the case. In fact, the breakthroughs and insights seemed so natural that it was hard to understand why I hadn’t felt that way before! I found myself approaching each meditation session filled with energy and curiosity as to what would happen next.

The more I meditated, the sharper I found my mind becoming. It might sound like science fiction, but I could see myself becoming more intelligent, more focused, more intuitive, and more creative. My memory improved, and I found myself with an increased ability to solve complicated problems and to overcome situations and obstacles that had stopped me cold before.

If you want to get rid of your stress, click this link immediately to order your FREE CD, report and voucher now.

For thousands of years, yogis and gurus have instructed us to ‘take a deep breath and relax.’ Now, hard science couldn’t agree more! A comprehensive study by the Harvard Medical School has demonstrated conclusively that deep relaxation influences our bodies on a genetic level, potentially leading to a number of long-term health benefits! Researchers at Harvard have discovered that long term practitioners of meditation and other relaxation methods have a higher number of ‘disease-fighting genes’ than those who don’t practice such methods.

More specifically, the researchers found that those who regularly practised meditation were at a dramatically decreased risk for infertility, high blood pressure, pain, and even rheumatoid arthritis. The researchers dubbed this “relaxation effect” a phenomenon that could produce similar effects to prescription drugs, without any of the dangerous side effects!

“We found that a range of disease-fighting genes was active in the meditation practitioners that were not active in the control group,” explained Dr Herbert Benson, associate professor of medicine at Harvard Medical School, who led the research. Even more encouraging, the “meditation effect” was found to increase with regular practice. The more people practised meditation or deep breathing, the greater their chances of remaining free of arthritis and joint pain with stronger immunity, healthier hormone levels and lower blood pressure. “After two months, their bodies began to change – the genes that help fight inflammation, kill diseased cells and protect the body from cancer, all began to switch on.”
* Excerpt is taken from The Sydney Morning Herald “Health Benefits of Deep Relaxation” Article 2009

As I continued to practice the Channeling Meditation, I just couldn’t believe how much my life was changing. The anger, frustration, fear, and self doubt I’d been carrying all my life melted away. People began to like me and respond to me in a more positive way. I began to like people…and get along with them! I began to assert myself and become more inquisitive. I seemed to develop an incredible sense of clarity, not only about what I saw and experienced but about myself and how I was the creator of what was happening in my life. I finally felt in control of my own life and destiny!

Although great things were happening in my outer life, the really big change was happening within me (where it really counts). For the first time in my life, I was peaceful, joyful – and yes, happy! – All because of the effects of a simple – but very powerful – guided Channeling Meditation! Finally, I decided that I had to put all I’d learned and experienced, along with the meditations I channelled, into something I could offer to others at a very affordable price.

Thus, in a small way, The Elite Channeling Meditation Course was born.
I had no idea when I started channelling guided meditation how much it would grow. As the year 2009 came to an end, over 1,000 people in Sydney had joined our Channeling Meditation groups and classes over the past three years. We’re still growing by leaps and bounds. (As we are currently in 2020 another 3000+ attendees have joined my meditations in Sydney)

I made a lot of mistakes in the first two years. But! Now, you can take advantage of my mistakes, wrong turns, blunders – and all the discoveries – I made as I perfected what I humbly believe is the most effective personal development tool created. In addition, you’ll find in the support and follow up materials that this is the most effective and easy-to-use method ever developed for reducing stress, energising your mind, and improving your long-term health. When you take advantage of the totally risk-free offer I’m going to give you, you’ll find that the follow-up and support materials contain everything you’ll need to experience this amazing meditation program for yourself.

…Yes, Now You Can Do It. Just Go to the Top of the Page and Press the Blue Buttons to Claim Your Free CD and Report Now!

To get your hands on your FREE report and CD, simply click on the buttons here to download!

You may not end up a genius, but then again…who knows? I do know this: those who use the Channeled Meditations on a daily basis, heal themselves through the process and will routinely tap into a whole range of remarkable abilities…

…they didn’t know they had!

And don’t forget, the remarkable deep meditation and brain synchronisation you’ll experience with these meditations create some truly amazing changes in mental and emotional health. Anger, depression, sadness, anxiety, jealousy, insecurity, self-doubt, substance abuse, and a whole universe of dysfunctional feelings and behaviours melt away – even in people who have “tried everything” without success!

Small Business Owner and Chef – Amanda
Shares her experience of our Channeling Meditation helping to dissolve her stress, improve health and sleep better.

Bank Teller – Anna
Shares how Channeling Meditation has allowed her to feel safe, protected and feeling stronger and more balanced.